BSDFA walks and other historic documentation, stored and collected over these 60 years have been placed on display by very kind permission of the Bishop’s Stortford Museum, at the Rhodes Centre and will be available to view immediately after the AGM on the 18th March 2017, and, thereafter for a further two weeks.

To further celebrate this amazing 60 years of our existence, you are invited to join an Anniversary Walk on Sunday 19th March. We will gather in the Nags Head PH Car Park, Dunmow Road, and depart at 10.00am. The walk will follow as reasonably as possible the very first walk included in the 1960 BSDFA Booklet of Walks.

**Boots are a must. Most of the route is fine, BUT you will need to negotiate several short muddy sections. There are also several stiles to negotiate.**

By way of note, if you are going to use the pub car park, please don’t forget to visit the pub upon your return from the walk, but please have some clean shoes with you to change into before you do so.

A copy of Walk No. 1 from the 1960 published booklet is attached. We shall try and follow this route as reasonably as possible, commensurate with weather and current road conditions.

Attached are some current photographs taken along the route:

The Nags Head PH – This is the beautiful eclectic art deco pub sign. The pub is distinctively individual, and unashamedly art deco having been designed as such, circa 1936, by the architect Ernest Brander Musman (1888-1972). 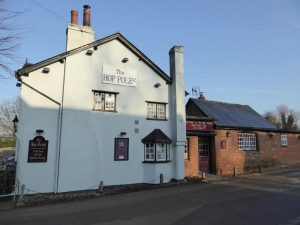 The Hop Poles – At Bedlars Green, is situated on the edge of Hatfield Forest, and has been in existence for some time. In a census of 1840 it was listed as a a beer-sellers and blacksmiths, and held by the Griffin family. Hops at that time were grown on the nearby Harps Farm and at Hallingbury Hall Farm. 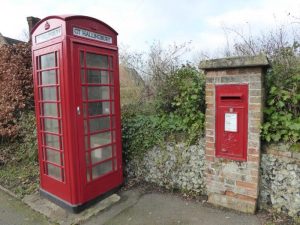 Bedlars Green – The telephone box is a series K6 designed in 1935 to commemorate the silver jubilee of King George V, sometimes referred to as the “Jubilee” kiosk, and it went into production in 1936. The the post box carries the insignia of King George VI whose reign commenced December 1936.

The commemorative walk set for the 19th March was reconnoitred by our Chairman, Dave Webber, and our Walks Co-ordinator, Peter Hales, on 28th January, 2017 and and current-day photographs taken.

09 April.2017 No details just yet, please refer to BSDFA web-site where information will be posted as soon as possible

23 April.2017 No details just yet, please refer to BSDFA web-site where information will be posted as soon as possible