Do have your Boots sorted and ready for our winter walks.

….and Lots of thing Happening Locally:

The GI&BMP correctly states that there is only one existing public footpath (BS PROW 63) directly impacted by the new development. However, there is another public footpath (BS PROW 64) that joins the Hazel End Road approximately 250 metres north of the entrance to the new country park. This public path leads to Hazel End village terminating close to the Three Horseshoes public house. It also connects to another footpath that provides safe pedestrian passage to the south and west of Stansted Mountfitchet. Unfortunately, access to the start of BS PROW 64 is along the busy Hazel End Road which as Users will be aware, has no footway and necessitates road walking. The footway  verge is wide and has the space to accommodate a footway but it is overgrown and steep in places. There is a strong case for creating a footway connection for safety reasons and to encourage new and existing residents to use the local public rights of way (PROWs) network. Could a new footway could be funded as part of the GI&BMP and if so who should the matter be raised with?

These issues have been copied to the Herts County Council(HCC) Rights of Way team for information, however, this area concerns both HCC and EssexCC.

EHDC has acknowledged our email and advised that – “on the face of it, a good idea and both Countryside and HCC Highways have been informed. There may be some funding available from the development”.

Countryside has submitted a Hybrid Planning Application to EHDC for a new community on land south of the town lying to the west of London Road/Thorley Street and north of the St James’ Way bypass.
Countryside’s plans allow for a mix of uses on the site to support a sustainable community, and currently propose around 750 new homes including affordable housing, land for a secondary school, a primary school, a care home, a 4-5 hectare employment area, a neighbourhood centre, community facilities and areas of public open space.
Consultation on the emerging proposals took place from 12th December 2017 to the 2nd February 2018. BSDFA received “208” formal responses to the proposed plans and thanks all those who took part in the consultation.
The feedback received was carefully reviewed and helped to identify key priorities and considerations in the development of our final plans for submission. Check out our website.

See you at the Next Walk…….Photograph – Courtesy of Dave Webber BSDFA -BS to Hazel End Rd. 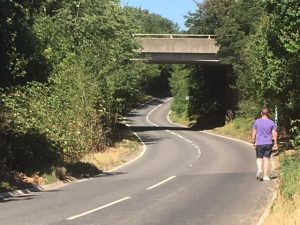