Start: From the bridge over the River Stort at the north-west corner of the Castle Gardens by the Causeway Link Road car park in Bishop’s Stortford town centre.
Distance: 4 miles.
Surface: A mix of roads, lanes, tracks and good field paths.
Obstacles: A steep flight of steps and 3 stiles.

Starting from the bridge proceed upstream along the right-hand bank of the river lined with willows and alders for about 300 yards to reach a wide concrete footbridge. A little way upstream is the site of the original ford from which the town takes its name and the gravelly river bed can be seen along here. Cross over this bridge and bear slightly right to follow the path through rough ground to enter a narrow alley between fences. At the end of this turn right and left into Bryan Road which leads to Rye Street where you turn right and follow to reach a zebra crossing. Nearby is an old milestone showing 29 miles to London. This dates back to the days when the main road to London ran through the town centre. 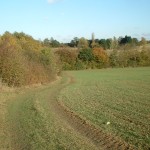 Cross the road here and go straight up Galloway Road, which is the route of the old Roman road from the ford, to reach a flight of steps which take you to Barrells Down Road. Cross over and go down Cricketfield Lane to the bottom of the hill where a finger post on the right indicates the footpath to Farnham. Follow this path to the playing field and walk diagonally across to the far corner. The line of the path is visible as a hollow worn by the passage of feet over many years. At the corner pass through the wooded old drive which used to lead to Whitehall, now much overgrown but once lined with rhodedendron bushes. On the far side of the drive bear half right across the field to the old mound. This mound which is located next to a spring which used to flow from the foot of the hill has undergone various uses and alterations during its existence. At one time it was used as a shooting range and presently it serves as a BMX track. One of the large oaks growing from it bears lightning scars from about 50 years ago.

Beyond the mound follow the path visible going up the hill towards a solitary fir tree. Go over the stile and cross the lane to the footpath between hedges which soon turns right to follow the edge of Hoggates Wood. This is an ancient coppice wood, mainly of hornbeams, but has not been coppiced for many years. At this time of year look out for the autumn fruits, most striking of which are the vivid red “necklaces” of bryony berries. At the far end of the wood the path turns left under the A120 bypass road, then over a stile on the right to follow the line down to another stile in the far bottom corner. After this stile turn right and 50 yards along you come to a woodchip surfaced gallop where you must be alert for galloping horses. Cross the gallop and turn right on to a track which you follow downhill for about 700 yards.

Turn right at the end of the gallop. On your left now behind the hazel bushes is the deep cutting of Bourne Brook which rises in chalkland and only flows during wet periods. Go under the bypass again and turn right up the hill with the road on your right and turn left at the top. On a clear day one is rewarded with a panoramic view from Farnham Church in the west to Birchanger Wood with the water tower in the east as you follow this path in a straight line until it emerges on to Foxdells Lane by cottages. 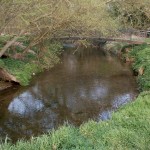 Turn left down the lane, bear left again at the bottom of the slope and carry on with the wall on your right which used to surround the grounds of the Grange. Turn right at the green-boarded building which started life as a dairy and go down to Rye Street. Cross the road, turn left and after about 200 yards turn right into Cannon’s Mill Lane. Just before the level crossing take the path on the right which soon leads to a footbridge over the Stort. You can now follow the river bank all the way back to the starting point.