Most of this walk is along country lanes so there is not too much mud to contend with at this time of year. There is much of interest along the route and on a bright day a lot of open views.

Parking: If you have not arrived by train or bus there are pay car parks near by, or you might prefer to start at other points along the route.

From the front of Stansted station go out along Station Road and at the crossroads cross over to Lower Street. Carry straight on at the first fork and then bear right at the Dog & Duck, continuing past the old school towards Gall End. Admire the big spotted pigs on the left. At the end of the straight lane carry on through the gate to the left of North End House. This was at one time the old work house.

You are now on an ancient track which used to be the main route out of Stansted to the north. It leads to an open field and the path follows the left hand edge along the stream that is usually dry. A look at the stream bed will explain how Stansted got its name (which is saxon for Stony Place). On the far bank of this stream you will soon pass an ancient pollard oak that is probably at least 400 years old. Follow the path round the field edge until you come to a waymark post  where you turn left and continue through trees and bushes to emerge after about 30 yards at the bottom of a slope. Tracks off to the right round here will lead to the Aubrey Buxton Nature Reserve which is open to the public and can be reached by car from the top of the lane which you will cross shortly. 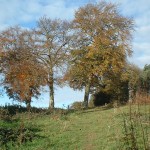 Ascend the slope to the beech trees at the top and carry straight on along the top of the field with open views to the left. At the lane turn right up the hill for about 60 yards and then turn left on to the footpath by the holly tree. The path keeps to the left and passes through a scrubby area. The bank on the left marks the edge of old gravel pits that are now a shooting range. At the end of the scrub the path turns right and then left through a gate and then continues for about 70 yards. Those of you who are interested in hedge dating will see that this appears to be an ancient hedge along here. It is probably the route of the old road before Charles II had the present main road built to speed his journeys to Newmarket races. 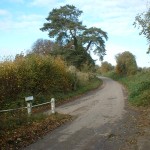 You now come to a cross path by an oak tree. The path that you are on goes ahead, bearing right across the next field towards a white post just visible in the far hedge. Our Footpaths Association planted this post some years back to show the route of the path that gets ploughed every year. Do not follow that path, but turn left on the bridleway down the hill. At the bottom, cross the road to the lane opposite. This is Pennington Lane, which you follow for about a mile, ignoring new roads to the left, until you reach Bentfield Green. There is a rich variety of trees, shrubs and flowers to be seen along this lane throughout the year. The caravan dwellers on the verge have lived there for many years and have raised a large healthy family. The father was born on the local farm some time after the war to itinerant workers and returned to occupy this site after he was married. Before reaching the Green you will see a small pond on the right. There is a spring here that rarely dries up. Unfortunately people consider it a good place to dump rubbish, as indeed they do all along these lanes. 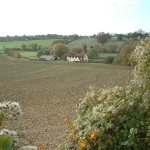 Turn right at Bentfield Green, past the Rose & Crown and round the corner to Bentfield Upper Green. Turn left at the far end of the Green into Bentfield Causeway for about 70 yards and turn right onto the track by the black-boarded shed, just past the boulder once used as a mounting block. Through the gate and over the stile a short way ahead. The path exits this field at the far corner where you go through the hedge and turn right. From this point you get a distant view over Bishop’s Stortford, Thorley, Harlow and beyond. The path leads down across a muddy stretch to Lime Kiln Lane. Turn left and follow the lane for  about a mile, forking left at Watermill Lane junction. All along here you get good views over the Stort Valley and you will pass a very obvious badger set with its spoil spilling over the lane. 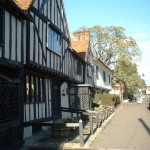 On reaching the main road, cross over and turn right down the hill and up to the river and railway bridge. When you reach the first part of the bridge the tallest trees about 40 yards to the right are black poplars that are becoming quite rare. On the bridge turn left into Forest Hall  Road and then immediately left through the wooden kissing gate onto a footpath. Follow this path with Stansted Brook on the left until you go through another kissing gate and come to a road at Stony Common. Turn right and then left into West Road, noticing the Old Bath House on the corner. Keep going along West Road until you reach the railway footbridge on the left. From the footbridge you will see Stansted Windmill which is well worth a visit during opening times in the summer. Cross the bridge and then carry on along the lane to arrive back at the station.